What is one of the most powerful first questions that gets asked about our children?

It will be one of the very first markers that will define our children’s basis of recognition, approval and their identity. It will impact on how they are treated, dressed, defined and talked to and it will police our children’s emotions, who they feel they can be in the world, and the kind of relationships they can have with others. And yet crazily, it is often seen as one of the most harmless and simple questions to ask about our children. So what is that question I hear you ask (drum roll please….)?

Yep you heard me right. It is one of the most powerful and most impactful questions that will probably ever get asked about your child. And why is that? Well, it’s not because there is anything inherently wrong with masculine and feminine traits. But what is wrong, is that these overly simplistic traits are only placed on particular bodies so that they are seen as natural, inevitable and obvious. This means, for our children, that if they have a penis then they will probably be perceived to be less emotional and love playing with toy cars and if they have a vagina then they will probably be perceived to be more emotional and love playing with dolls. And this all begins before they are even born meaning that they are never really given the space and time to learn and discover who they are or want to be. It is why, apparently, even before a child’s third birthday they can already identify toys, activities and play that is associated with a particular gender. So gender norms and stereotypes are extremely powerful and pervasive and this is masking our children’s individual, complex and interesting varied selves and that is incredibly sad! 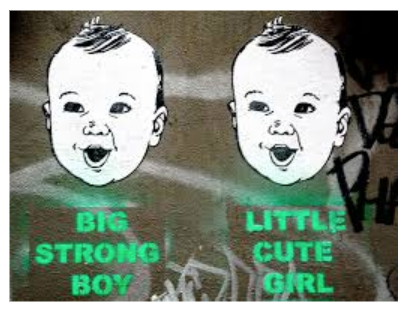 For young people who wish to live outside of these roles (such as trans, non-binary or gender non conforming identities) or don’t want to have certain expectations placed on them because of their perceived gender, the impact on their sense of self and mental health can be hugely damaging. Young, transgender people’s mental health in particular is significantly undermined by transphobic victimisation, and they are also disproportionately affected by depression, anxiety, self-harm and suicide. On average, transgender children leave school earlier than any other group and 2 in 5 trans young people have tried to take their own life. This gets a lot worse if you are also experiencing other identity barriers such as race, sexuality or class oppression. The average life expectancy for a trans woman of colour is 35 years old!!!

But, I hear no one ask, if our children are not gender questioning (i.e if they are cisgender) or they fit within these very narrow ideas of gender (though in reality no one ever does) then surely we don’t really need to worry about this right? Hmm, think again – gender norms and stereotypes can impact on anyone’s mental health, well being, aspirations, confidence and self worth whether you are trans, cisgender or gender non- conforming.

So basically no one is really benefiting from rigid gender norms and stereotypes and we all need to work hard to challenge this stuff! As parents we have a very powerful opportunity to do so. 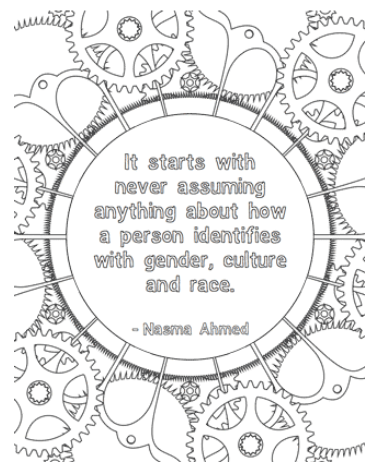 My top tips on raising children free from gender based barriers:

If we want to have a fighting chance at challenging gender based barriers for our children we need to start off by taking a good hard look at ourselves and becoming aware of our own gender biases! How much do you make assumptions about a child’s skills, aspirations or likes or dislikes based on gender stereotypes?

Help children develop a questioning mind so that they learn from an early age to critically think about the world around them. If you are reading a book where the mum is in the background cooking or the tractors are all male then point it out to them. Ask them if they think it matters whether they are a boy or a girl or whether anyone can do that job.

We need to help our children develop shame resilience (a borrowed term from the fantastic Brene Brown) which means giving our children the skills and tools to be able to resist being shamed into conforming to gender roles. A great way to achieve this is by nurturing an environment for our children that helps them develop a sense of self which is a genuine alternative to the gender norms and stereotypes that they have on offer. This starts with taking a look at the books, toys and media that we have available for our children. 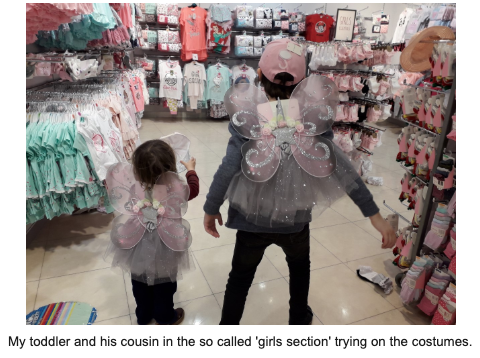 There are hugely gendered issues around sexual consent and domestic violence and so we need to find opportunities within our parenting to help our children develop a sense of agency on who gets to touch their bodies and communicate that their voices are important and to be respected. This means they get to decide whether they want to kiss grandma or eat that last bit of carrot.

Natalie Bennett runs a feminist playgroup in Bristol called ‘Smash The Patriarchy Playgroup’ and is a coordinator and facilitator and one of the original founding members of TIGER (Teaching Individuals Gender Equality & Respect) a Bristol-based not-for-profit cooperative that runs workshops for schools to overcome gender-based barriers for young people. Its aim is to improve mental health and wellbeing and provide a space for young people to explore their identity.